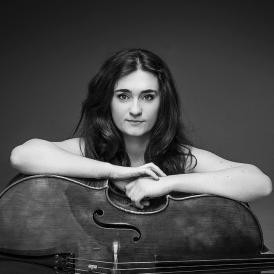 Born in Bialystok (Poland) in 1993. Since 2018, she studies at the Reina Sofía School of Music’s Aline Foriel-Destezet Cello Chair with professor Jens Peter Maintz. She has been granted scholarships by Santander Bank Polska and Fundación Albéniz. In 2019 and 2020 she received the Diploma to the most outstanding student of her chair.
Between 2012 and 2018 she studied with professor Wolfgang Emanuel Schmidt at the Franz Liszt Weimar University of Music, from whom she has later received masterclasses, as well as those from David Geringas, Frans Helmerson, Truls Svane, Philippe Müller, Ivan Monighetti, Julius Berger, László Fenyö, Gustav Rivinius, Kazimierz Michalik, and Torleif Thedéen. She won the first prizes ex aequo at the Witold Lutosłławski competitions in Warsaw (2015) and at the Salieri-Zinetti for Chamber Music in Verona (2019). She has also been awarded at the International Competitions Antonio Janigro in Zagreb and Luis Sigall in Viña del Mar (2016).
She has been principal cello of the Metamorphosen Berlin and the CeLISZTen ensembles with whom she has performed in Germany, Netherlands, Austria, France, Italy, Canada, Norway, and Namibia. She has also played as a soloist with Radio Poland and the Polish Philharmonic Orchestra, Warsaw National, Pforzheim and Young Kiel Philharmonic Orchestra, under the direction of Antoni Wit, Marek Mosia, Alexander Humala, Jacek Błaszczyk and Adam Klock, among others. As a member of the Reina Sofía School of Music’s Freixenet Symphony Orchestra she has also been directed by Andrés Orozco-Estrada, Víctor Pablo Pérez, and Plácido Domingo.
As a student of the School, she has also been a member of the Enagás Schumann Ensemble and the Sonorité Trio and she is currently part of the Areti Duo.