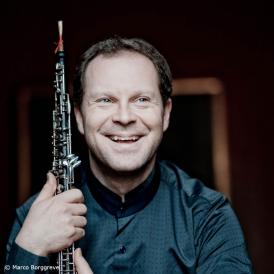 Alexei Ogrintchouk is one of the most outstanding oboists performing today. A graduate of the Gnessin School of Music and the Conservatory of Paris, where he studied with Maurice Bourgue, Jacques Tys and Jean-Louis Capezzali; he combines astounding technique with virtuosity and lyricism.

Originally from Moscow, Alexei was already performing all over Russia, Europe and Japan from the age of 13. He became the winner of several international competitions including the prestigious CIEM International Competition in Geneva at the age of 19. He was also the winner of the European Juventus Prize in 1999, two Victoires de la Musique Classique Prizes in France in 2002, the Triumph Prize in Russia in 2005 and Borletti Buitini Trust Award winner in 2007. He has been part of the prestigious Rising Stars and BBC New Generation Artists Programmes.

Since August 2005 Alexei Ogrintchouk has been the first solo oboist of the Royal Concertgebouw Orchestra of Amsterdam with Mariss Jansons, and with Daniele Gatti afterwards. Until then he held the same position at the Rotterdam Philharmonic Orchestra with Valery Gergiev.

Alexei Ogrintchouk combines orchestral playing with his solo and conducting engagements. A charismatic and technically brilliant soloist, he has performed concertos under the baton of conductors such as Mariss Jansons, Valery Gergiev, Seiji Ozawa, Kent Nagano, Michel Plasson, Daniel Harding, Andris Nelsons and Gianandrea Noseda, among others.

As he is in much demand as soloist and chamber musician, he has performed all over the world including the Concertgebouw in Amsterdam, the Musikverein in Vienna, the Royal Albert Hall and the Wigmore Hall in London, the Carnegie Hall in New York, among others. In addition, he is a regular guest in festivals such as BBC Proms, MIDEM, Colmar, Verbier, Lucerne, Berliner Festspiele, Santa Cecilia and the White Nights in Russia.

In September 2011 Alexei Ogrintchouk was named successor of Maurice Bourgue as oboe professor at the Haute École de Musique de Genève. He has also been a visiting professor at the Royal Academy of Music in London (2001-2011), professor at Musikene in San Sebastián (2009-2011) and at the Royal Conservatory in the Hague since 2010. Moreover, he gives masterclasses in places including the Pablo Casals Chamber Music Academy in Prades, the Mahler Academy in Ferrara, the Summer Courses in Bilbao, the Villecroze Music Academy, the Aurora Academy in Sweden and the Weimar International Masterclass.

His first CD with the pieces by Schumann was released on Harmonia Mundi "Nouveau musicians" Series to exceptional reviews. His discography includes the world premiere of the slow movement of Beethoven Oboe Concerto (Raptus classics), music by Britten (Record One), Skalkotas (Bis Records), Mozart Oboe Concerto with the Concertgebouw Chamber Orchestra (PentaTone Classics). The three most recent CDs include Bach Oboe Concertos, Mozart Oboe Concerto and Quartet, a 20th Century Recital and the Strauss Oboe Concerto (all on BIS Records).