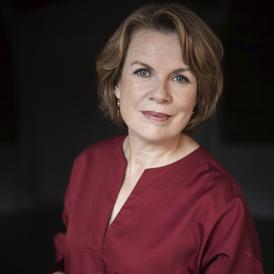 Bernarda Fink, daughter of Slovenian parents, was born in Buenos Aires and received her musical education at the Instituto Superior de Arte del Teatro Colón. A sought-after concert and recital singer, she is acclaimed for her musical versatility. Her repertoire ranges from ancient music up to works of the 20th century. Among many others, she frequently appears with the Vienna and Berlin Philharmonic Orchestras, London Philharmonic, Royal Concertgebouw Orchestra, Cleveland Orchestra and the best known Baroque orchestras under Barenboim, Blomstedt, Bychkov, Chailly, Gardiner, Gergiev, Jacobs, Jansons, Muti, Norrington, Pinnock, Prêtre, Rattle, Saraste and Welser-Möst.

Highlights of the past seasons were, recitals in Cologne, Vienna, Madrid and Paris, Mahler's Symphony No. 2 with Mariss Jansons in Copenhagen and with Boston Symphony Orchestra und Andris Nelsons in Boston, Mahler's Symphony No.3 with Jakub Hrůša in Bamberg and Paris, a tour across South America with Camerata Salzburg as well as Dvořáks Biblical Songs with Manfred Honeck in Prague and Dresden and Mahler's Lied von der Erde with the South Netherlands Philharmonic and Hans Graf in the Netherlands.

Many of her recordings have been awarded prizes including the Diapason d’Or and Grammy. She was awarded the Austrian Honorary Medal for Art and Science, and together with her brother Marcos Fink, the most prestigious cultural award of Slovenia sponsored by the Prešeren Foundation. In September 2014 she received the title of Österreichische Kammersängerin.