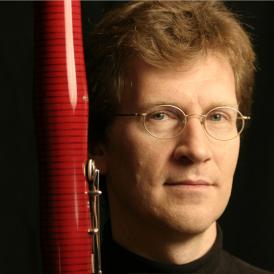 Born in Horten, Norway, he began his bassoon lessons at the age of 11 with Robert Rönnes. He later studied with Torleiv Nedberg at the Norwegian Academy of Music in Oslo. He won his first orchestral position with the Bergen Philharmonic Orchestra at the age of 16, where he was promoted to co-principal of the same orchestra soon after. He continued to study with Professor Klaus Thunemann in Hannover and in 1997 he became a professor at the Hannover Academy of Music and Theatre.

He has had many solo performances with renowned orchestras including, among many others, the South German Radio Symphony Orchestra, the Royal Swedish Chamber Orchestra and the Norwegian Chamber Orchestra, with conductors such as Sandor Vegh and Iona Brown, who have taken him throughout Europe and Japan.

He is a member of the Sabine Meyer Wind Ensemble and of the Villa Musica Ensemble. He is also a regular guest at several music festivals such as the Schubertiade in Austria, the Spannungen in Germany and the Glasbemi September in Slovenia.