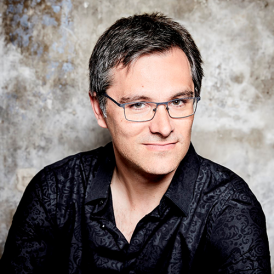 Born in La Canonja (Tarragona), he studied piano at the Conservatories of Tarragona and Barcelona, and architecture at Barcelona’s Polytechnic University of Catalonia.
He has worked as composer, pianist and musical director of dance, television, cinema and, above all, theatre, collaborating with directors such as Lluís Pasqual, Calixto Bieito, Josep Maria Flotats, Joan Ollé, Sergi Belbel and Jordi Prat i Coll.
Besides producing and composing several albums for the singer Lídia Pujol, he also works as musical director, pianist and accordionist for the singer Maria del Mar Bonet.
He has conducted the Barcelona Symphony Orchestra (OBC), the National Orchestra of Andorra (ONCA) and the contemporary music ensemble Bcn216.He has premiered and recorded piano works by composer Joan Albert Amargós and Enric Granados. Since 2003, he is a pianist and harpsichordist collaborating with the OBC, with which he has recorded as soloist for Naxos, Harmonia Mundi and BIS labels.
After completing his harpsichord and basso continuo studies with Béatrice Martin at the Catalonia School of Music (ESMUC), he began an intense activity in baroque, renaissance and medieval music ensembles, collaborating with Hespèrion XXI, Le Concert des Nations, L'Arpeggiata, Mala Punica, The Rare Fruits Council, La Hispanoflamenca, Les sacqueboutiers de Toulouse, MUSIca ALcheMIca and La Caravaggia. He has performed in prestigious music festivals and concert halls in Europe, America and Asia.
He has made more than 40 recordings for labels such as Aparté, Alia Vox, Erato, Passacaille and Pan Classics.
Since 2005, he is the conductor and harpsichordist of the baroque orchestra Vespres d'Arnadí.He is currently professor of Improvisation and Chamber Music at the Catalonia School of Music (ESMUC), as well as artistic director of the concert series of the Monastery of Pedralbes (Barcelona).
Since the 2021-2022 academic year, he has been associate professor of harpsichord at the Reina Sofía School of Music’s Société Générale Historical Performance Programme.