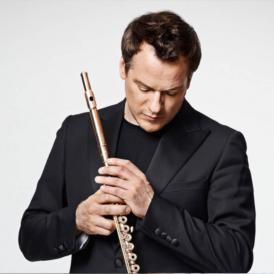 French-Swiss flutist Emmanuel Pahud began studying music at the age of six. He graduated in 1990 with the First Prize from the Conservatory of Paris and continued studying with Aurèle Nicolet. He won the first prize in the Duino, Kobe and Geneva competitions, and at the age of 22 he joined the Berliner Philharmoniker as Principal Flute under the baton of Claudio Abbado, a position he still holds today. In addition, he enjoys an extensive international career as soloist and chamber musician.

He is a dedicated chamber musician and regularly gives recital tours with pianists Eric Le Sage, Alessio Bax, Yefim Bronfman, Hélène Grimaud and Stephen Kovacevich, as well as performing jazz with Jacky Terrasson. In 1993 Emmanuel founded the Summer Music Festival in Salon de Provence together with Eric Le Sage and Paul Meyer, which is still a unique chamber music festival today. He also continues with performances and recordings with “Les Vents Français” – one of the most important wind quintets – with François Leleux, Paul Meyer, Gilbert Audin and Radovan Vlatkovi&#263;.

Since 1996, Pahud has recorded 40 albums exclusively for EMI / Warner Classics, all of which have received unanimous critical acclaim and many awards, proven to be one of the most significant contributions to recorded flute music.

Emmanuel Pahud was honoured to be named Chevalier dans l’Ordre des Arts et des Lettres, as well as HonRAM by the Royal Academy of Music. He is also an ambassador for UNICEF.