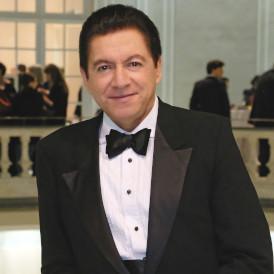 He was born in Mexico City, where he made his debut in 1970. Winner of the Munich ARD Competition in 1974, Mozartian singer and the rightful heir to Fritz Wunderlich. Permanent member of the Zurich Opera 1977/2013. He has performed in renowned halls such as the state operas of Munich and Vienna, La Scala in Milan, Covent Garden and Metropolitan Opera in New York, as well as in the main international festivals including Bayreuth, Salzburg, Aix-en-Provence, and Edinburgh, among others. He has had the privilege to work with greatest conductors such as Herbert von Karajan, Karl Böhm, Carlo Maria Giulini, Sir Colin Davis, Claudio Abbado, Riccardo Muti, Seiji Ozawa, Christian Thielemann and Daniel Barenboim.
Thanks to his versality as opera singer (from Mozart and Rossini to Massanet and Wagner), that of concert and lied, and his countless recordings, he received the Deutscher Schallplattenpreis, the Orphee d’Or and the award to the 1988 Best Musical Event in Tokyo, the Mario del Monaco Otello d’Oro award, the Golden Mercure in Munich and the Golden Medal of the National Institute of Fine Arts of Mexico.
He has also been awarded the title of Kammersänger of the Vienna Opera, that of Singing Professor by the Stuttgart School of Music and that of Honorary Doctor by the Michoacan University of San Nicolás de Hidalgo. From the 2020-2021 academic year, he will be Professor of the Reina Sofía School of Music’s Fundación Ramón Areces “Alfredo Kraus” Voice Chair.