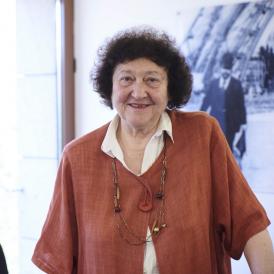 Born in Russia in 1936, she studied at the Tchaikovsky Conservatory in Moscow with Alexander Goldenweiser, where since 1961 she has developed her teaching career. She has collaborated as Assistant Professor with artists such as Tatiana Nicolaeva and Dmitri Bashkirov. She has also taught a numerous pianists who tour the world’s main concert halls, as well as winners of national and international competitions. Among her most celebrated students are Maria Stembolskaya, Radu Lupu and Arcadi Volodos. She has been awarded by the Russian Ministry of Culture for her teaching activitiy. In the 1993-1994 academic year, she entered the Reina Sofía School of Music as assistant professor of Dmitri Bashkirov, Professor of the Fundación Banco Santander Piano Chair, and since 2000-2001, she is in charge of her own class at said School.