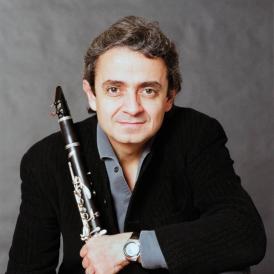 He was born in France in 1963. He is leading a busy career both as a soloist and a sought-after chamber musician.

He frequently performs as a solist in prestigious international music halls like the Wigmore Hall in London, the Musikverein in Vienna, the Konzerthaus in Berlin, the Victoria Hall in Geneva, the Carnegie Hall and the Lincoln Center in New York, the Suntory Hall in Tokyo, the Théâtre des Champs Elysées and Théâtre du Châtelet in Paris and several prestigious festivals such as Salzburg, Lucerne, Montreux, Jerusalem and La Roque d'Antheron, amongst others.

He is regularly invited to Asia, the United States, Australia, the Middle East and all over Europe for concert tours and master classes.

He has made many recordings, most of which have won international prizes.