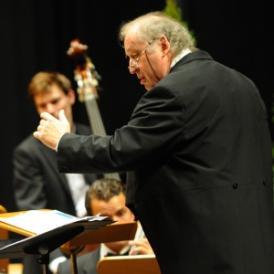 Born in Cluj (Romania) in 1952, Péter Csaba was the Artistic Director and Chief Conductor of the MÁV Symphony Orchestra Budapest (Hungary) from 2012 to 2019, and since then, he is Permanent Guest Conductor.
Prior to that, he was the Artistic Director and Principal Conductor of the Besançon Symphony Orchestra. He also founded two chamber orchestras: Les Solistes de Lyon and the Virtuosi di Kuhmo in Finland. Between 1993 and 2002, Maestro Csaba was Artistic Director of the “Musica Vitae” Chamber Orchestra in Sweden. He was also the Artistic Director of the Laponia Music Festival and created the Festival Euro-Musica, for great young talents, broadcast by Swedish television and Eurovision. Due to his contribution to Swedish music life and to the arts of music in the world, he was elected member of the Swedish Royal Academy.
He has toured the world as both violinist and conductor, and has worked with the Berlin Symphony Orchestra, the symphony orchestras of the City of Birmingham, Singapore, Warsaw, Radio Prague, Rumanian Radio, Hungarian Radio, Ensemble Orchestral de Paris, Lyon National, Kyushu Symphony Orchestra, Japan Philharmonic, Geidai Philharmonic Orchestra, Tokyo’s Kioi Sinfonietta, Sinfonia Varsovia, the Stockholm Chamber Orchestra, the Lisbon Metropolitan, Helsinki Philharmonic, among many others.
He has collaborated with artists like P. Fournier, Z. Kocsis, T. Berganza, K. Zimerman, N. Gutman, O. Kagan, M. Pressler, D. Bashkirov, J. Galway, and composers like A. Schnittke, H. Dutilleux, K. Penderecki, G. Kurtág, S. Gubaidulina, and X. Montsalvatge.
He is the Artistic Director of the Santander Encounter of Music and Academy from 2002, and prior to that, he held the same position at the Kuhmo Music Festival in Finland and Ravel Festival in France.
He has recorded music both as a conductor and as a violinist with a wide ranging repertoire, while both of his performances of Shostakovich and Bartók have received critical acclaim and have been described as some of the best recordings of their works. When released, his CD devoted to Sibelius was elected best recording of the year in the USA.
As a pedagogue, he has held the Orchestra Chair at the Conservatoire National Supérieur de Musique in Lyon from 1996 to 2018.
In 2017, he was awarded the badge of Chevalier de la Légion d’Honneur of France and the badge of Knight of the Order of the White Rose of Finland. In 2021 he was awarded the Medal of Honour of Fundación Albéniz.