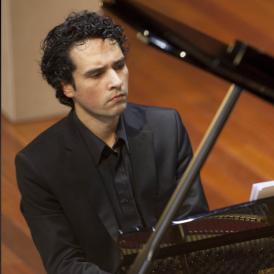 Mexican pianist Ricardo Ali Alvarez is graduate from the Hochschule für Musik und Theater Hannover in Germany, the Conservatorio della Svizzera Italiana in Lugano, Switzerland and the Conservatorio de las Rosas in Morelia, Mexico. He has been a recipient of the Yehudi Menuhin Live Music Now Hannover scholarship in Germany, the Fondo Nacional para la Cultura y las Artes from Mexico and the Williamson Foundation for Music from California.

His first CD production "Images et Ballades" distributed by the Swiss label "Altri Suoni", with works by Liszt, Debussy and the Mexican composer Manuel M. Ponce, has been a great success and it has been received with the best reviews in the musical environment. Musical examples have been broadcasted by NDR Kultur, Deutschland Radiokultur and the Radio della Svizzera Italiana. His recent performance of Rachmaninoff’s 3d Piano Concerto with the Orchestra della Svizzera Italiana has been applauded and appraised with utmost success.