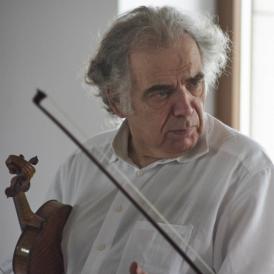 The acclaimed Kazak violinist and violin teacher Zakhar Bron began his studies in the Stoliarski Music School in Odessa and later on at the Gnessin State School of Music with Boris Goldstein, graduating from the Tchaikovsky Conservatory with Igor Oistraj.

He has won several prizes in many international prestigious competitions, such as the Queen Elisabeth in Brussels and the Wieniawski Competition in Poznan. Additionally, as a recognition of his artistic work, he was awarded the Bundesverdienstkreuz am Bande in Germany and the Encomienda de la Orden Civil de Alfonso X El Sabio in Spain.

In addition to a wide career as soloist, Zakhar Bron has an important pedagogical vocation. He is Honorary Professor in Japan, Poland, Bulgaria and Russia, and since 1998, he is Lecturer of Violin at the Hochschule für Musik in Cologne. At the same time, he teaches at the Zürcher Hochschule der Künste (Switzerland), Glinka Conservatory in Novosibirsk (Russia), Musikhochschule Lübeck (Germany), Codarts in Rotterdam (The Netherlands), and at the Royal Academy in London. Additionally, he is Professor of the Telefónica Violín Chair at the Reina Sofía School of Music in Madrid since its foundation in 1991.

Many of his former students stand out as usual winners of the most important international competitions, such as Vadim Repin, Maxim Vengerov, Daishin Kashimoto, Mayu Kishima, Michail Ovrutsky, Erik Schumann, Tamaki Kawakubo, and Mayuko Kamio.